Hartzell, Caroline A. 1999.  “Explaining the Stability of Negotiated Settlements to Intra-state Wars.” Journal of Conflict Resolution 43 (1): 3-22.

Although the majority of civil wars end when one warring party achieves a victory over the other, negotiated agreements are growing more common as a means of ending intrastate conflict.  To explain why some negotiated settlements prove stable and others do not, scholars have examined the impact of factors such as superpower conflict, group identities, and third-party guarantors.  This article argues that those negotiated settlements that are the most extensively institutionalized – that is, that provide institutional guarantees for the security threats antagonists face as they move toward a situation of centralized state power – are the ones most likely to prove stable.  An analysis of all settlements negotiated to end intrastate conflicts during the period between 1945 and 1997 supports this proposition.

Hartzell, Caroline A., Matthew Hoddie, and Donald Rothchild. 2001. “Stabilizing the Peace After Civil War: An Investigation of Some Key Variables.” International Organization 55 (1): 183-208.

In the wake of negotiated settlements to civil wars, one critical problem involves reassuring people who have been killing one another that conflict is not about to break out again, endangering people's lives. Those concerned with the success of negotiated settlements have debated how best to enhance the prospects of a stable peace. We address this question by exploring variables that may explain the longevity of negotiated peace settlements. These variables are divided into two categories – one tapping into the potential effects of the environment in which settlements are negotiated and another focusing on the impact of settlement arrangements. On the basis of our analysis of thirty-eight civil war settlements negotiated between 1945 and 1998 we identify the environmental factors and institutional choices that affect the short-term stability of the peace following civil war.

This article examines how power-sharing institutions might best be designed to stabilize the transition to enduring peace among former adversaries following the negotiated settlement of civil wars.  We identify four different forms of power sharing based on whether the intent of the policy is to share or divide power among rivals along its political, territorial, military, or economic dimension.  Employing the statistical methodology of survival analysis to examine the 38 civil wars resolved via the process of negotiations between 1945 and 1998, we find that the more dimensions of power sharing among former combatants specified in a peace agreement the higher is the likelihood that peace will endure.  We suggest that this relationship obtains because of the unique capacity of power-sharing institutions to foster a sense of security among former enemies and encourage conditions conducive to a self-enforcing peace.

Hoddie, Matthew and Caroline A. Hartzell. 2003.  “Civil War Settlements and the Implementation of Military Power-sharing Agreements.”  Journal of Peace Research 40 (3): 303-320.

This article considers the role that the implementation of peace agreements has on the prospects for fostering a durable peace following the negotiated resolution of civil wars.  Focusing on the 16 peace agreements between 1980 and 1996 that have included provisions for the sharing or dividing of military power among former combatants, we find that the complement implementation of this aspect of settlements significantly improves the prospects for maintaining peace. We suggest that this proves to be the case because of the important and credible signals of conciliatory intent among former enemies that are made through the process of implementation.  We find that implementation serves as a concrete signal of a genuine commitment to peace as signatories to an agreement prove willing to endure the costs associated with both compromising their original war aims and withstanding potential challenges from within their own groups.  Based on these results, we offer policy recommendations focusing on the role that third-party actors and aid donors might play in facilitating the successful implementation of negotiated peace agreements.

In this book, we review data from all negotiated civil war settlements between 1945 and 1999 in order to identify the factors that contribute to the success of efforts to reach durable settlements of civil wars. We find that settlements are more likely to produce an enduring peace if they involve construction of a diversity of power-sharing and power-dividing arrangements between former adversaries. The strongest negotiated settlements prove to be those in which former rivals agree to share or divide state power across its economic, military, political, and territorial dimensions. This finding is a significant addition to current literature, which tends to focus more on the role that third parties play in mediating and enforcing agreements.

Two different positions regarding the impact that the fate of factions has on the duration of the peace appear in theories of civil war termination.  One holds that the peace will be long-lived when the organizational structures of all but one of the factions that compete in a war are destroyed or dismantled at the conflict’s end.  The other position maintains that the peace can best be preserved when rival groups agree to share state power at the war’s end.  I examine the evidence for those competing arguments, drawing on a new dataset on the fate of factions that participated in civil wars between 1945 and 1999. The results of this analysis indicate that although destroying opposing groups’ organizations has little effect on the duration of the peace, an agreement among rivals to share power can help to prolong the peace.
Hartzell, Caroline A. and Matthew Hoddie (with Molly Bauer). 2010. “Economic Liberalization via IMF Structural Adjustment: Sowing the Seeds of Civil War?” (International Organization 64 (3): 339-356.

Previous studies that have explored the effects of economic liberalization on civil war have employed aggregate measures of openness and have failed to account for potential endogeneity bias.  In this research note, we suggest two improvements to the study of the relationship between liberalization and civil war.  First, emphasizing that it is the processes that systematically create new economic winners and losers rather than particular levels of economic openness that have the potential to generate conflict, we consider the effects of one oft-used means of liberalizing economies: the adoption by countries of International Monetary Fund (IMF) structural adjustment programs.  Second, we use a bivariate probit model to address issues of endogeneity bias.  Analyzing all data available for the period between 1970 and 1999, we identify an association between the adoption of IMF programs and the onset of civil war.  This finding suggests that IMF programs to promote economic openness unintentionally may be creating an environment conducive to domestic conflict.

In this study, we evaluate the effects of the International Monetary Fund's structural adjustment programs (SAPs) on the public health performance of countries. We test the claim made by proponents of SAPs that although these programs may produce short-term hardship for the countries adopting them, they will generate positive developmental effects in the long term. We draw on a global data set and employ a model that takes into account the potential for selection bias in the adoption of SAPs by states. The central finding of the article is that SAPs in the short term raise the exposure of populations to conditions that increase incidences of disability and death. Contrary to the assertions made by the advocates of SAPs, we also find evidence that these programs have attenuated but still harmful effects on public health performance in the long term.
​
Hartzell, Caroline A. and Matthew Hoddie. 2015.  “The Art of the Possible: Power Sharing and Post-Civil War Democracy.” World Politics 67,1: 37-71.

This article focuses on the role that power-sharing arrangements play in making it possible for some countries to make the transition to democracy successfully after civil war.  We hypothesize that the adoption of multiple forms of power sharing, measures constructed to end particularly difficult civil wars, facilitate the emergence of a minimalist form of democracy following some intrastate conflicts by helping to assuage warring groups’ security concerns.  We use a bivariate probit model to account for the possibility that the decisions by wartime rivals to engage in power sharing and whether to adopt democracy or not are interrelated. Employing panel data for all civil wars concluded between 1945 and the end of 2006, we find support for our hypothesis.

​Civil wars typically have been terminated by a variety of means, including military victories, negotiated settlements and ceasefires, and “draws.” Three very different historical trends in the means by which civil wars have ended can be identified for the post–World War II period. A number of explanations have been developed to account for those trends, some of which focus on international factors and others on national or actor-level variables. Efforts to explain why civil wars end as they do are considered important because one of the most contested issues among political scientists who study civil wars is how “best” to end a civil war if the goal is to achieve a stable peace. Several factors have contributed to this debate, among them conflicting results produced by various studies on this topic as well as different understandings of the concepts war termination, civil war resolution, peace-building, and stable peace.
​
​Hartzell, Caroline A. and Matthew Hoddie. 2019.  “Power Sharing and the Rule of Law in the Aftermath of Civil War.” International Studies Quarterly 63 (3): 641-653.

What effect do power-sharing institutions agreed to as part of civil war settlements have on the development of the rule of law in post–civil war states? We contend that power-sharing measures facilitate the emergence of the rule of law in two ways. First, they establish a form of institutional constraint that promotes judicial autonomy and independence. Second, they foster a sense of security among judges and other political actors that bolsters commitment to the law. We demonstrate the plausibility of a positive relationship between power sharing and the rule of law through an analysis of post–civil war states between the years 1948 and 2006. Our findings suggest that civil war settlements can help to establish the rule of law when they include mechanisms aimed at allaying the insecurities of political actors in the postconflict environment.
Hartzell, Caroline A. and Andreas Mehler, eds. 2019. Power Sharing and Power Relations After Civil War.  Boulder: Lynne Rienner Publishers.

​There are numerous studies on the role of power-sharing agreements in the maintenance of peace in post-conflict states. Less explored, however, is the impact of power sharing on the quality of the peace. Do power-sharing institutions in fact transform the balance of power among actors in the aftermath of civil wars? And if so, how? As they address these issues, seeking to establish a new research agenda, the contributors to this volume provide a rich new analytical approach to understanding how power sharing actually works. 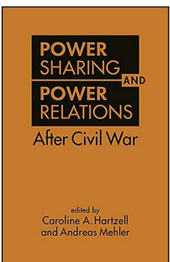 Hartzell, Caroline A. and Matthew Hoddie. 2020.  Power Sharing and Democracy in Post-Civil War States: The Art of the Possible.  Cambridge University Press.

​Power Sharing and Democracy in Post-Civil War States examines the challenge of promoting democracy in the aftermath of civil war. We argue that minimalist democracy is the most realistic form of democracy to which states emerging from civil war violence can aspire. The adoption of power-sharing institutions within civil war settlements helps mitigate insecurity and facilitate the emergence of democracy. Power sharing promotes 'democratization from above' by limiting the capacity of states to engage in predatory behavior, and 'democratization from below' by empowering citizens to participate in politics. Drawing on cross-national and case study evidence, we find that post-civil war countries that adopt extensive power-sharing institutions are ultimately more successful in transitioning to minimalist democracy than countries that do not. 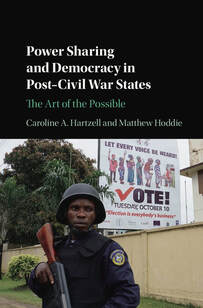